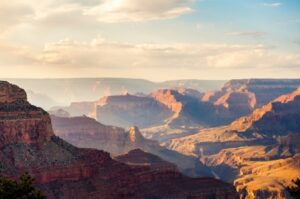 The Grand Canyon is one of the most well-recognized geological formations in the country, and even the world! It’s so massive that it can be spotted by astronauts orbiting overhead in the International Space Station. Chances are, you’ve seen hundreds of breathtaking images of the canyon in your lifetime.

But no matter how many times you’ve seen the Grand Canyon, there’s always more to learn about this remarkable place. Check out a few of our favorite facts about the canyon below!

Its walls are older than the dinosaurs
The Grand Canyon might seem like an ideal place for archaeologists to find dinosaur fossils, but you won’t find them here. That’s because the rocks that form the canyon’s walls were formed long before the dinosaurs roamed the earth. The canyon itself was carved by the Colorado River after the dinosaurs had gone extinct, however.

It’s home to the most remote community in the lower 48
Deep in the base of the Grand Canyon you can find Supai Village, the most remote community in the Contiguous United States. The village is the capital of the Havasupai Indian Reservation, and it has a population of just over 200 people according to the latest census data. Today, mail in the village is still delivered by pack mule!

It creates its own microclimate
Elevations in and around the Grand Canyon vary dramatically, which can contribute to some unusual weather patterns that are unique to the area. The temperature at the bottom of the canyon is typically about 20°F cooler than the temperature at the rim, for example. With this in mind, it’s always a good idea to pack an insulating, water-resistant layer when hiking to the bottom of the canyon.

To schedule your next tour of the Grand Canyon with our talented team of professional guides, give us a call or contact us online today!

Your Source For The Ultimate Grand Canyon Adventure